The Reason Center makes it possible for our partner groups and organizations to host engaging and knowledgable speakers to discuss a wide range of topics important to atheists, freethinkers, agnostics, and even theists.

Recently, the Sacramento AOF (Atheists and Other Freethinkers) Speaker Series hosted author David Fitzgerald to talk about his latest published 3-volume work on the non-historicity of Jesus Christ titled Jesus: Mything in Action.

David is widely recognized as a well-honed researcher and critic of western religions. He is everywhere in the freethought community. Feathers on his cap include being a board member of the San Francisco Atheists and of the Center for Inquiry’s San Francisco branch, founder of the first Atheist Film Festival and of San Francisco’s oldest Darwin Day celebration called Evolutionpalooza.

As expected, the event at the Sacramento Reason Center was amply attended. This place is fast becoming the go-to venue for secular-oriented events in the city.

Lucid, rich with evidence, convincing and funny, David presented the contemporary arguments supporting the Jesus-as-myth perspective. He is quick to point out that these arguments are not necessarily his own, and many have been around for a long time, but he is successful in synthesizing them such that the disparate arguments form a coherent and forceful whole.

Denis De Luchi, author of Fish Byne Yola: The Jew Who Saved Galileo will be next AOF Speaker at the Reason Center, on October 29, 2017. RSVP on the AOF Meetup page.) 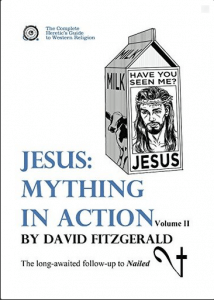 Outside of the gospels, the evidence for a historical Jesus is practically non-existent. Among the different gospels, there are numerous incompatibilities in the portrayal of Jesus, not only in the events therein described, but in the character of the man himself. Given the fact that they were written generations after he was supposed to have died, by authors unknown and who were certainly not first-hand witnesses to the stories they narrated, can we really believe that such events are accurate and not embellished or even completely made up?

Even afterwards, the gospel stories continued to evolve in the copying, miscopying, translations upon translations, and interpretations of interpretations. Thus over time the myth grew larger in the retelling, details being added and refined to fit desired narratives.

Ultimately though, as David points out, it does not really matter whether or not Jesus was a real person or was based on one. Even if he were real, Christianity would still not make sense. From the standpoint of Christian believers though, it is essential that Jesus be a historical person.

Not the stereotypical “angry atheist”, David imbued his lecture with light-hearted drollery, complete with slides of secularist cartoons.

After his speech, a few of us from the Reason Center had dinner with David, where he exposed his mirthful side even further.

Complete Heretic’s Guide to Western Religion. Book 1 is The Mormons (2013). His even earlier book Nailed: Ten Christian Myths That Show Jesus Never Existed at All (2010) is, for some reason, not in the series. I’m guessing that he conceived of the series after that book came out. (Why not label that Volume 0, David?) Nailed, Mything in Action—the book titles betray his deep sense of humor, doesn’t it?


Having read The Mormons two years ago, I’m confident that these new volumes will also be hard to put down. I am especially looking forward to reading Volume 3, where he invites the reader to imagine traveling through time to the early years of Christianity, in a multi-chapter section titled “The Gospel According to H. G. Wells”. Sci-fi and religion—I know David can pull that off.

As he was giving me my copies, I mentioned to him that I don’t personally know any other openly atheist Filipino. He signed my book thus: “For Ben, Yours in Christ. Maraming salamat po! — Dabid”