For a cisgender heterosexual like myself, it is one thing to understand and to empathize with the idea that prejudice against non-conventional sexual orientation should have no place in current society. It is another thing to experience, even vicariously, such prejudice and feel the pain that it brings about, as we did at the Sunday Assembly on December 10, through the moving narratives of the featured speaker, Professor Johnnie Terry.

Professor Terry spoke about growing up gay, his struggles while going through the educational system in a version of reality in which his existence was ignored, and how he eventually took it upon himself to rectify this false perspective. He is still fervently committed to this task.

Last year, his work on The Spectrum Archives: Narratives of Courage, an oral history documentary project, won him the statewide LGBT David A Sanchez Award. He is currently a professor at the LGBT Studies Department and the Applied Art and Design Department at Sierra College.

Born and raised in Kentucky, Johnnie Terry earned his bachelor’s and master’s degrees in Philosophy at San Diego State University. His master’s thesis was on Michel Foucault and Queer Theory. Johnnie is the father of four sons, friend of three rescued dogs, and a few terrariums of frogs.

As a child growing up with very religious parents in a Baptist home, Johnnie at some point as an adolescent realized that their church was preaching against him, and that he was considered a terrible human being. When he opened up to his parents about his sexuality, they disowned him. In this non-accepting environment, forced to view himself through the eyes of others, he was filled with self-loathing. He felt unsafe and he left home.

Very soon he was forced to face the hard truth that for a gay person, there is no place that is safe. 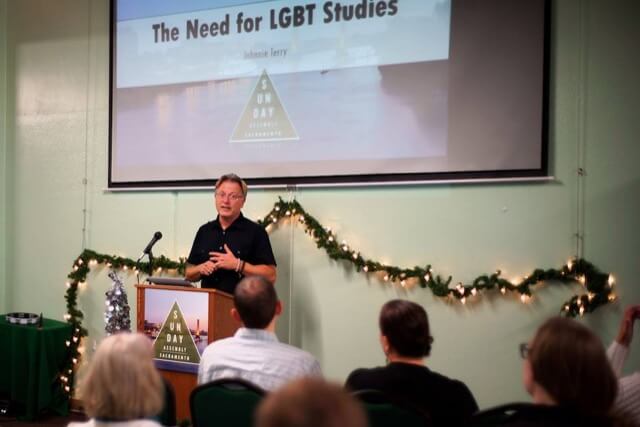 This is undoubtedly not a unique experience, but what sets it apart from other similar traumatic stories is how Johnnie used his personal challenges to energize his subsequent chosen mission of promoting the understanding of LGBT people—of what it means, what it feels like, to be gay. He proceeded to fight his own demons through the enlightenment of others.

Coming from his heart, Johnnie’s arguments aim straight for the listener’s. Neither intellectualized nor lofty, they can convince anybody but the most heartless of conservatives. Through his words, we appreciate that LGBT is not just a bunch of letters, but a label for living, breathing, loving and hurting human beings. LGBT history is human history.

As professor of Philosophy and Humanities at Sierra College, Terry encouraged his students to think critically and question their religious upbringing. Through his persistence, he successfully championed the establishment of the LGBT Studies Department of the same school. He has left a positive imprint on the education of his past students, who continue to commend his influence on their lives as they struggle to exist as authentic members of the community.